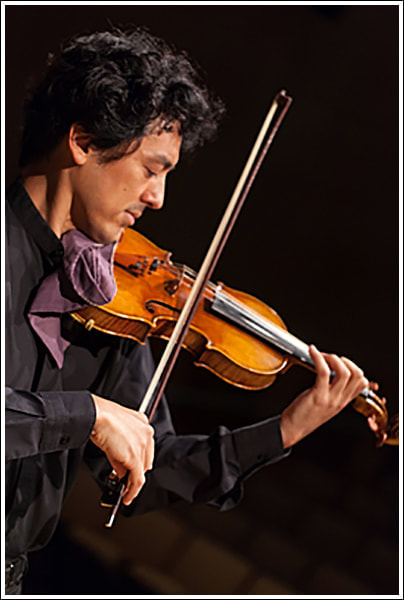 A recent performance “allowed Kumar to demonstrate that, in addition to making an utterly beautiful sound, he is a born leader, and the performance responded to every last facet of a work gigantic in stature.” (Bernard Jacobson, Music-Web International) Also praised by press for his “obvious communicative powers”, “sense of sheer enjoyment”, and having “the precision and tonal richness of a virtuoso”, violinist Kevin Kumar has appeared as soloist with the Los Angeles Philharmonic, among numerous other orchestras.

​Kumar has also been active as an orchestral player, serving as Concertmaster of the Schleswig-Holstein Festival Orchestra under Valerie Gergiev and Semyon Bychkov in tours throughout major European cultural centers. He was personally invited by Sir Georg Solti to participate in the Solti Project at Carnegie Hall.

As a devoted chamber musician he has performed in various ensembles and festivals throughout the United States, Europe, and Central America and participated in numerous radio and television broadcasts, including primetime major network shows. He is the co-founder/director of Salastina Music Society, a non-profit chamber music series presenting world-class performances of chamber music in unique and engaging formats. Salastina’s live performances have received rave reviews and been broadcast on various programs, including Performance Today. Kumar is also the violinist of the Catgut Trio.

At the outset of his concert career, Kumar was forced to spend an extended period away from the violin due to injuries; during this time he became involved with songwriting and production for major label musical artists in the U.S. and in East Asia. In addition to attending Columbia University and the Manhattan School of Music, Kumar received the Jascha Heifetz Scholarship and his Advanced Studies in Music Diploma from the University of Southern California and Bachelor of Arts degree from Stanford University. He has studied with Alice Schoenfeld, Viktor Tretyakov, Linda Rose, and Gennady Kleyman and benefited from masterclasses with Dorothy Delay and other musical luminaries. He was honored to have been appointed Co-Artistic Director of ChamberFest Canandaigua (formerly Canandaigua LakeMusic Festival) beginning in its 10th anniversary season.